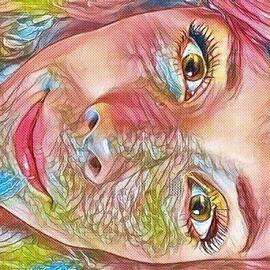 Marisa Sherwood is a vocalist, multi-instrumentalist, and songwriter with more than 20 years of experience and education. She teaches contemporary styles of voice, classical double bass, acoustic guitar, songwriting, and music theory & ear training - all specifically tailored to the individual.

Before beginning her career as a Vocalist, Marisa studied classical Double Bass at the University of North Texas while performing in a variety of symphony orchestras including the Allen Philharmonic, Monroe Symphony, and the Lone Star Wind Orchestra. She recorded five albums with the North Texas Wind Symphony, as well as a variety of studio work for local groups. She also had the privilege of attending the Tanglewood Music Festival in Lenox, MA; and worked as a counselor and coach at the Annual Bradetich Double Bass Workshop for three years, getting to work with hundreds of talented musicians. She studied privately with Tom Lederer (Co-Principal, Dallas Symphony Orchestra), and Pat Moulds (Principal, Dallas Opera Orchestra), to whom she attributes much of her passion and methodology for teaching.

In 2009, she co-founded the Newgrass group, Backwater Opera, for which she was the lead vocalist, rhythm guitarist, and band manager until 2017. In this time, Backwater Opera performed in 20 states, recorded 3 albums, and won several accolades (including 1st Place at the 2011 Pickin' in the Pines Band Contest, and a finalist position at the 2010 Telluride Bluegrass Festival). They also supported the Indie-Folk band, Seryn, on their Southern US "This is Where We Are" tour. Before concluding their journey, Backwater Opera was described by Eugene Weekly as "a group that stitches the sound of bluegrass music into a classical indie-rock tapestry...with songs ranging from sorrowful to blisteringly introspective, and vocal harmonies sweet enough to melt even the harshest capital pacific northwest ice."

While living in Denton, TX and working with Backwater Opera, Marisa had the privilege to work under Jake Laughlin of DentonRadio.com as a talent promoter and event manager during their developmental stages. She was also invited by them to co-host their symposium for independent musicians on the subject of finding greater success in a local environment.

In 2014, Marisa was accepted into Berklee College of Music on a full scholarship for Voice performance, where she attended as a Professional Music major (a customizable degree). During her time here, she focused on a wide variety of subjects including Contemporary Vocal Styles, Vocal Health, Advanced Ear Training, Jazz Theory, Alexander Technique, Music Cognition, Music Business & Law, and Songwriting. She studied Voice under direction of Rebecca Shrimpton; Stage Performance Technique under Livingston Taylor; and Jazz Theory under Mike Scott.

She concluded her time in Massachusetts as the Music Director of the Folklore Theatre Company in Gloucester, MA for their final season in 2018. In 2020, she became a Certified Piano Technician under the direction of the Piano Technician Academy. Currently she is working towards her certification in Estill Voice Training.